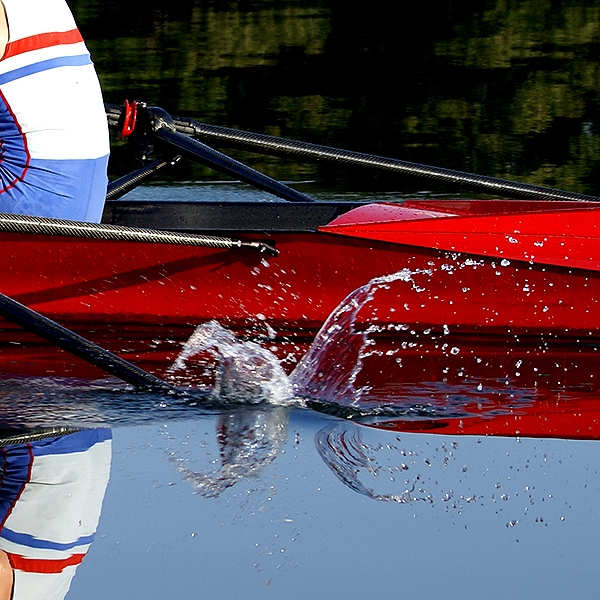 To seek out efficiency improvements in rowing the following article will examine the importance of the release and recovery phase of the rowing stroke. While it seems obvious to say a clean release and smooth recovery are necessary to increase boat speed, the details of why this is so important often eludes athletes.

Simply stated an efficient release allows rowers to efficiently convert potential energy stored during the drive phase into kinetic energy available during the recovery phase, resulting in maximum boat speed. Similarly, we will discuss how to maximize acceleration and minimize the deceleration of the hull as the rower’s mass moves in the opposite direction to that of the boat during the recovery. Force Measurement Data allows us to examine this graphically and explore what changes in the way we row can maximizing energy and improve the efficiency of the stroke.

The sport of rowing is like no other. The rower is the prime mover in a mechanical system with a continuous repetitive cycle. The rowing system has two quite different masses composed of boat and rower. The boat to rower mass ratio is roughly 1 to 6, and both masses move relative to one another in a linear rather than an elliptical orbit, as does the sun/earth, or earth/moon systems. Rowing with a force measurement system and a real-time display can serve as a “Physics Lab” for hands-on learning of both the basics of physics and the mechanics of this sport.

We aim to answer two key questions in this discussion: Can force measurement data suggest what can be done to maximize efficiency?

How can we modify the force curve to A. create more energy, and B. make the recovery phase of the stroke more efficient?

Keeping the above statements in mind, we will briefly go through the stroke cycle starting with the Catch.

The Catch is close to the point of lowest boat velocity of the stroke cycle, due to the reverse of the rower’s mass and its consequent momentum change (mass x velocity). Most rowers are taught that maximum power application should be the focus at the beginning of the Catch phase of the rowing stroke when the blade first meets the water. In actuality, quickness (vertical speed of entry) must first and foremost be the focus. Only after the blade is fully immersed in the water does the already dynamically moving boat result in a mechanically favorable oar angle that can be used as a target to apply maximum power. Any effort before this point results in slippage if the blade is not fully engaged with the water, and if the blade is fully engaged with the water but is in a mechanically disadvantageous position, then high force can be applied, but it will not move the boat due to wasted internal energy by the rower with no work being done; in other words an isometric exercise. The point is that the rower must be patient and wait until he or she is in a mechanically favorable position to apply maximum pressure.

The drive portion of the stroke, which is when the oars are in the water propelling the boat is always less than 1/2 the total stroke cycle time, (except for very brief sprinting periods over 40 strokes per minute when drive time approaches recovery time). Potential energy is generated during the drive phase and will then be used as kinetic energy during the recovery phase. This explains why maximum boat velocity is achieved during the recovery while the oars are out of the water. Kinetic Energy = (½ Mass x Velocity²)

The Recovery part of the stroke cycle becomes at the end of the drive phase when the boat/athlete system starts with the highest potential energy and about the average velocity of the entire stroke cycle. The highest boat velocity will be seen at the end of the recovery, just before the catch if the rower uses his or her mass efficiently. See the Force Measurement Data below represented graphically and numerically showing where the highest boat speed occurs (black vertical line intersecting the blue curve on the first graph shows boat velocity). (Click to Enlarge FM Data): 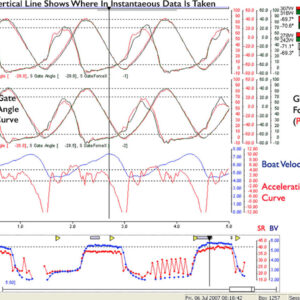 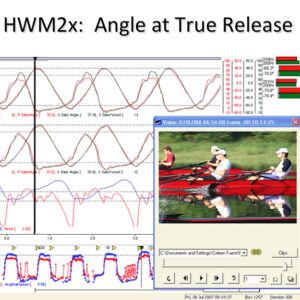 Velocity At the Release 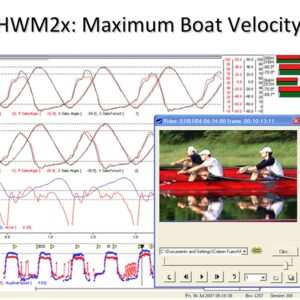 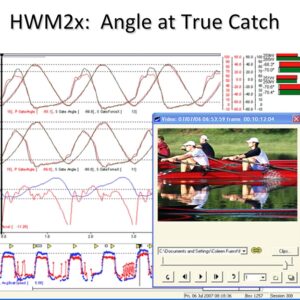 Following are some still picture that defines the areas on concern from the Release to the Catch (Click to Enlarge Photos): 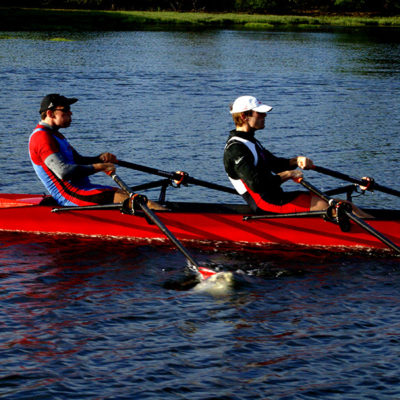 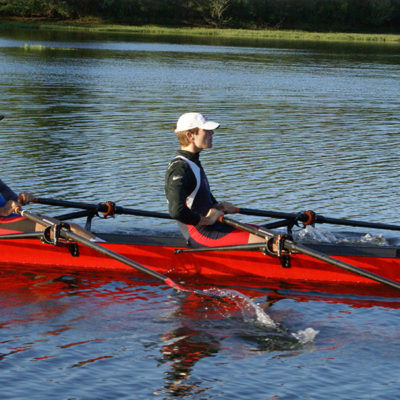 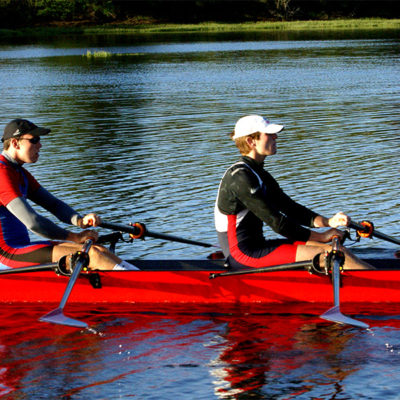 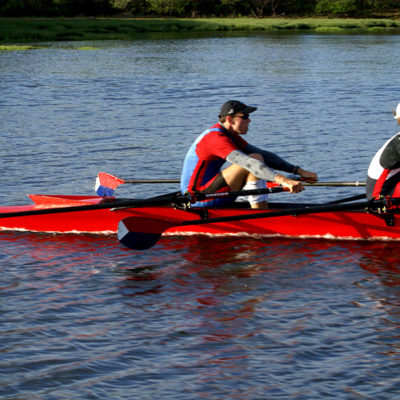 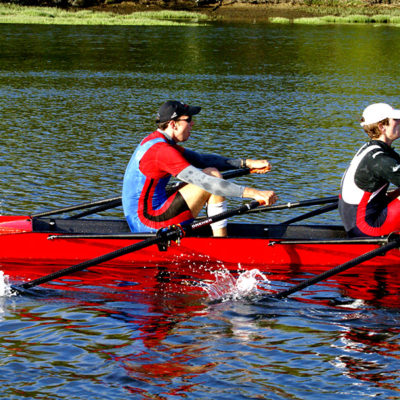 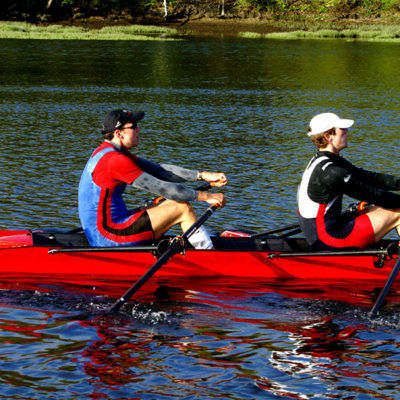 If you refer again to the force measurement data and remove everything but the red and green (port and starboard) curves and note that the vertical “y” axis is “force,” and the horizontal “x” axis is “time” you will see a force curve. That is simply is impulse curve (Force x Time) and the area under it represents energy in Joules.

The purpose of this article is to engage in a meaningful discussion with athletes and coaches as to the impact that force measurement data can have on rowing efficiency, technique, rigging, and equipment.  Understanding that potential energy (Work = Force x Distance) stored during the drive and about to be released as Kinetic Energy = (1/2 Mass x Velocity Squared), as the rowers mass. Where the boat’s mass is ~ (6 x the boat Mass) moves toward the next catch should be enough information along with the graphs of momentum, boat speed and velocity to postulate a theory that attempts to answer question A. and B. above.

Key Areas of Focus on the Recovery:

What causes a poor Release?

The first place where energy can be lost is by having a poor Release. The Release is one of the hardest skills to master. A smooth release is all-important in that it allows the sculler or rower to maintain maximum boat speed. Whatever work that is done on the drive can be negated by a poorly executed release. Furthermore, a poorly executed release can further slow the boat by causing problems throughout the Recovery all the way to the next Catch. Following are some problems that can aggravate a proper Release:

What Causes a Poor Early to Mid-Recovery:

Importance of the Last Part of the Recovery Before the Catch:

The most efficient rowers will maintain a quick release, then allow the hands to flow away, forward followed by the body, and then a uniform seat speed until just before the catch with the last few inches of slide remaining a quick speed up in conjunction with a quick catch. This will prolong the momentum and have a positive impact on maintaining boat velocity.