The boat/rower forms a dependent and conjoined “system”.  The boat and the rower are part of a system of two different masses, not unlike the sun/earth “solar system”,  which move independently but are intrinsically linked together resulting in a defined system path.  Unlike the sun and earth systems, the rowing system is supported by still water.  If we are to simulate this rowing system as practiced in the boat on the water we must simulate all the mechanics involved as well as the forces as close as possible.  What distinguishes rowing in the tank from rowing on the water is that the water in the tank serves a totally different purpose and that is to generate a resistance force due to the blade being pulled through it. Unlike in the boat, the tank rower is in a fixed position.  In the case of the boat, the water is still and the rower moves relative to it.  The indoor rowing tank is an entirely different system.  However, if designed correctly, the force of the water resistance against the tank oar blade can be a close force simulation to that experienced in the boat.  This simulation is modulated by the blade size, outboard lever arm, spread mechanics, etc.  Although a moderate current is generated along the path that the water takes, the water in the tank is used as resistance only.  The rowers’ effort and the unique tank mechanics mirror the dynamic force profile as experienced when rowing in the boat.  Besides force profile matching other benefits of the tank include the experience of the oar handling mechanics (square up, feather, force application throughout the drive, release, etc.) plus the crew synergism as well as sculling force curve synergism from side-to-side.  With the addition of a real-time feedback display of the force curves and other related graphs, the athlete-powered tank can become more than just another training tool, but a powerful self-coaching tool.

In the athlete-powered tank, the athletes are the pump and they receive the maximum training effect from the power that they introduce into the system. 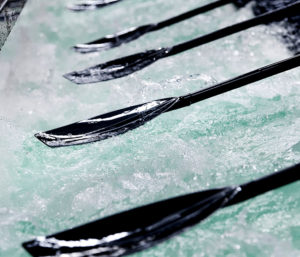 Conversely, in a mechanically powered tank, the mass of the water and the power input overwhelms that of the athlete making the water feel unresponsive and heavy on the drive.  The water in a mechanically powered tank circulates at a constant velocity, this is distinctly different from that of a boat where velocities change throughout the drive.  As a result, the technique used is quite different on the “drive” in a mechanically pumped tank vs. a boat where the athlete can “accelerate” the hands toward the finish.  Consequently, the simulation on the drive is poor with a mechanically pumped tank.  From a coaching standpoint, the drive is the key to unlocking the maximum speed in a racing shell, requiring the best simulation in the tank, especially on the drive. Force measurement instrumentation, coupled with an athlete-powered tank provides a program with a tangible competitive advantage in developing speed on the water and is based upon the following.

Our Tank is an Environmentally Friendly (ESG Compliant) Design:

One of the many pieces that we take very seriously at Durham Boat Company is our impact on the environment and what we can do to minimize our footprint.  We have examined both athlete-powered and mechanically assisted flow technology in developing our present tank design.  We strongly believe that an athlete-powered tank design can most closely approximate the force levels and replicate handle velocity experienced in the boat while not requiring any additional energy costs to operate the tank.  Unlike a Dreher Tank, powered tanks require significant amounts of energy to power them making them very costly to operate.

In contrast to a sleek racing shell with low drag, a mechanically powered tank has a large surface area in contact with the pumped water, so the drag resistance and power needed to propel the water is significant.  Most designs range between 200 HP and 600 HP required to operate.  1 kilowatt is required to generate approximately 1 horsepower in a powered tank.  This converts to roughly 200 kilowatts/hour to operate this style of rowing tank. This is one of the many reasons why we believe a Dreher Tank is not only a more affordable option for your program but also a more environmentally friendly one too.

We Provide a Modular Design and Latest Enhancements:

The Dreher Indoor Rowing Tank has been modular since 1992.  We can make any size 2-pool sculling tank or boat position sweep tank from 2 stations to 12 stations as well as up to 24-stations (i.e. 12 athletes to a side). Our tanks incorporate two pools, separated by a wide center aisle with each row facing the same direction.  This allows quite a variety of price points to accommodate large and small programs alike to have the experience of an indoor rowing tank. Our modular design is significantly more cost-efficient than other tank constructions allowing for greater cost savings.

To our historical customers, we can retrofit older-style tanks with the latest rigging equipment, carbon seats, foot stretchers, monorails, and inner race splash shields.  We can provide a greater range of rigging adjustments and also force measurement instrumentation to improve the time taken to teach the athletes the proper technique or reinforce verbal instruction given by the coaches.  You will not have to worry about your design becoming obsolete and as new features or training become available, we pass that onto our installed base.  Also, an upgrade that we strongly recommend is the consideration of a force measurement system that will provide detailed stroke analytics and the ability for athletes to seat-coach. To read more about Force Measurement Instrumentation Click Here.

If your tank is ever damaged during a flood, fire, or other disaster or you just need some maintenance, we can send in a team to repair or replace the damaged equipment or just refinish the tank to make it look new again.

We Have an Experienced Team:

Once the components have been built and shipped to the job site we send a team of our experienced installers, some of who have been in tank design and installation for almost 30 years.  Our manufacturers and installers have been working with us for over 17 years.  They build the fiberglass composite sections and glass in the bottom connecting seams allowing for a smooth unimpeded flow of water.  We have installed thirty-five tanks including three tanks in the United Kingdom, one in Canada, and one in South Korea.  We have worked on all types and sizes of projects.  As such most installations of an 8-station tank typically take under 6 days to complete.  The bigger installations might take two-plus weeks to complete.

We have done many installations and have worked with many different architects and customers all over the world.  We have a large knowledge base, as a result, to draw upon to help you design the right indoor rowing tank solution for your program, size, and budget.