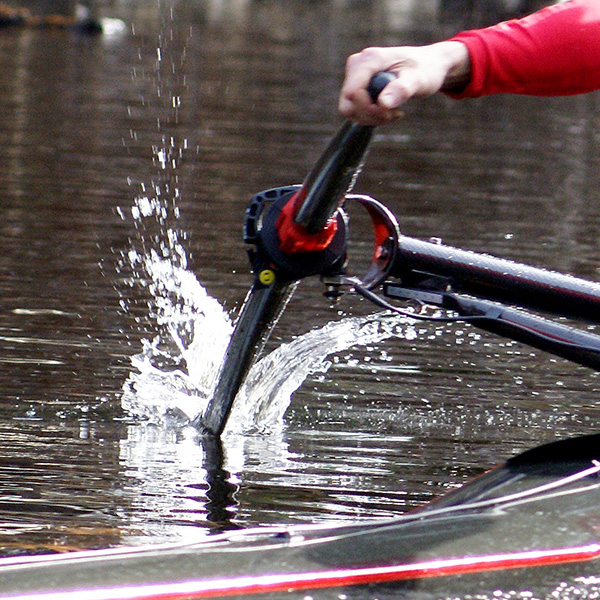 In our previous post Efficiency Improvements Part I, we discussed improvements to the Recovery Phase of the stroke to just before the Catch. In this article, we will examine the next phase of the stroke, the Drive. While the Drive phase may seem rather straightforward, there are a variety of concerns that a coach and athlete should take into account to produce the most effective and efficient stroke. Rather than approach the stroke with the classic anecdote of “pull as hard as you can,” we will examine how to apply force during the Drive phase to maximize boat speed.

The optimal Drive begins with a quick vertical speed of blade placement at the Catch. Only after this takes place, and the blades move out from the boat slightly, can force be effectively be applied. Of course, all this happens very quickly while the boat continues to move at its minimum velocity that it will see during the stroke cycle. (Click to enlarge the Following Data Screens for a graphical representation of this) 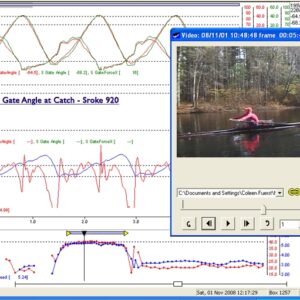 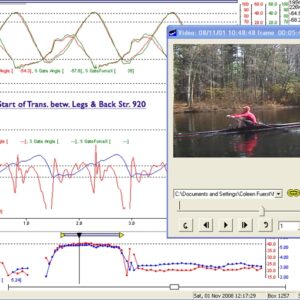 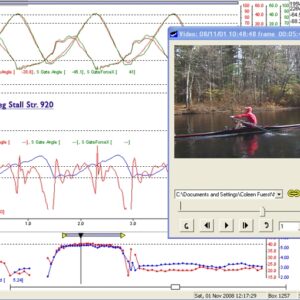 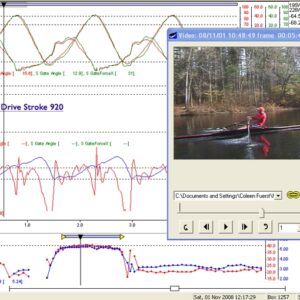 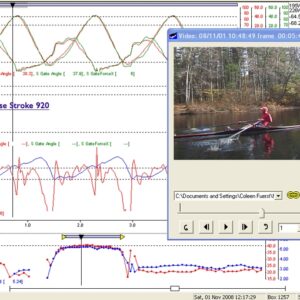 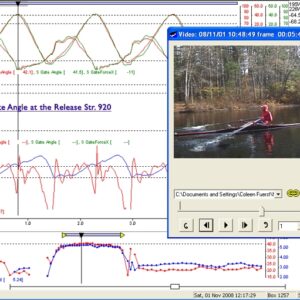 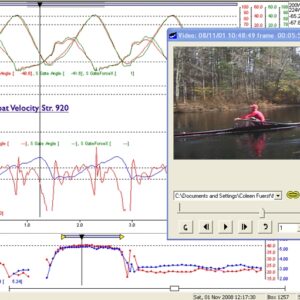 We will tackle the Drive phase by breaking it down into a variety of different areas of concern and examine each separately.

Quick vertical entry of the blade

Quick vertical entry of the blade, or in other words a quick catch, is exhibited by an equal and minimal splash on either side of the blade. The blade should go in quickly but needs an upward movement of the hands to assist the downward moving blade. Gravity alone will not do the trick. As the stroke rate increases the relative blade splash will increase but will remain equal on both sides of the blade as an effort is made to catch as close to the speed of the boat relative to the still water while maintaining as maximum a blade angle as possible.

Bury the blade below the surface

Following a quick vertical entry, an athlete needs to bury the blade completely. This is critical to not allow any blade slip while at the same time not expending too much energy right at the catch. Note, however, the faster the boat class and the higher the stroke rate, the earlier the maximum power application will be able to be made.

Prevent mounding of water before the blade

This is a manifestation of applying too much pressure too early before the blade is fully buried. Visually this will result in distorting the puddle formed rather than translating into greater boat speed. Essentially the athlete is shoveling the water along and not connecting and moving the boat.

Prevent cavitation or air entrainment before the blade

Air entrainment will cause porosity of water both ahead and behind the blade resulting in blade slip because of the reduced water density unable to support the blade against the applied force. In a similar fashion to mounding of water, air entrainment is caused by not completely burying the blade at the catch and also applying varying levels of force. Visually, the puddle will look frothy.

During the drive phase, the temptation for athletes is to immediately apply maximum force. However, this is not economical as no work (force x distance) can be done until a favorable blade angle is achieved.  However, you can put on too much force and in so doing use much energy (i.e., the energy that you need at the end of the race). Once the boat picks up speed, then efficient power (f x d / t) may be applied.This is why patience at the beginning of the drive should be encouraged. Once a favorable blade angle is achieved, due to movement of the hull past the blade, an athlete can begin to apply maximum force. While focusing on the handle, we should concern ourselves with handle velocity, or rather handle acceleration (the change in velocity).Referring to the handle speed curve; the x-axis represents time, and the y-axis represents angular velocity in radians. The resulting chart illustrates a complete real-time picture of blade angular velocity and acceleration during the stroke cycle.

Note that the 0-radian line roughly bisects the trace curve with the Recovery being a minus “mirror” of the Drive part of the stroke cycle. Much can be learned from the handle speed curve. This is especially evident when shown directly below the force curve as we do in the graphical display used in the rowing tank using the same x-axis time scale.  You can see this illustrated in the Instantaneous Force Measurement data as shown at the very end of this post.

Examining the image of handle speed curve on the left, notice the sharp, steep increase at the catch, this the graphical signature of a quick catch. Immediately after the catch, the dip to the minimum angular velocity cannot be avoided.  This dip is due to the blade being locked in the water (which is not moving) while simultaneously the boat is moving at the lowest velocity of the stroke cycle until the rower attains a mechanical advantage, due to blade angle, and begins handle (and boat) acceleration. On the handle speed curve, in general, a slope upward is blade acceleration, down is deceleration and level is constant velocity. The steeper the slope and the longer the stroke, the faster the boat will go. Note the mirroring of the curve during the recovery, particularly the speed up just before the catch, where we try to maintain momentum, and in turn velocity just before the catch.

When analyzing handle speed in an indoor rowing tank, the curve is quite-smoothed out since we are using the water as resistance force by pulling through it. This is unlike the actual boat situation where we anchor the oar into the water. There, the blade translation path as seen from above relative to the boat is roughly two intersecting parabolic curves resulting from the water passing first: Tip to tail and then reversing relative to the blade face because of variations of lift and drag generated forces. In either case of boat or tank graphically the slope of the curve shows acceleration, with acceleration being rate of change (rise over run) of oar angular velocity.

During the drive, as it applies to the larger sweep racing shell, the mechanical advantage differential between the bow and stroke seat is diminished. The goal for the athletes and the coach is to find synergism in the crew regarding how force is applied during the drive. Different ways of rigging by a sequential grouping of ports or starboards can also help in an attempt to balance the side-to-side difference in force. Synergism is necessary for all crew boats, except for the pair where unresolved forces try to spin the pair around a central point of the boat. In a “pair” we are forced to compensate with unequal leverage and force between the bow and the stroke.

To maximize boat velocity, during the Drive phase, in a sculling boat it is important to be aware of unequal force application due to the inherent “crossover” of the hands. Having the hands too far apart in the horizontal plane and/or the vertical plane can cause the unequal application of force. Nesting one’s hands at the “crossover point,” can mitigate this issue. With equal force application on the Drive phase, the goal for all members of a sculling boat should follow the same convention: “Right-hand leads into the body and left-hand, leads away, the left hand is rigged slightly higher than the right hand.” 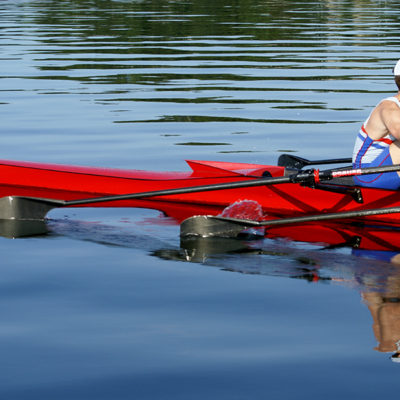 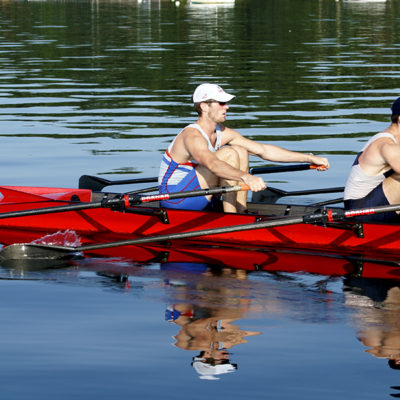 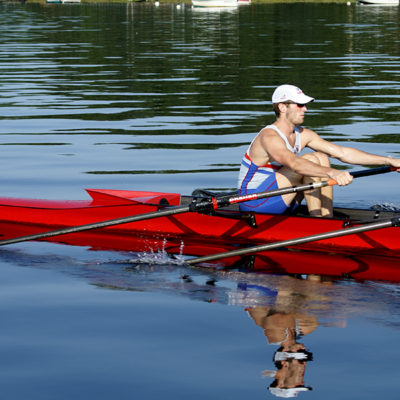 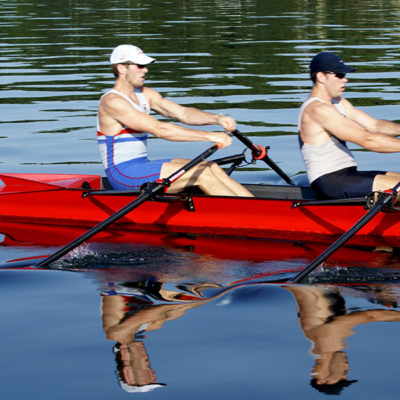 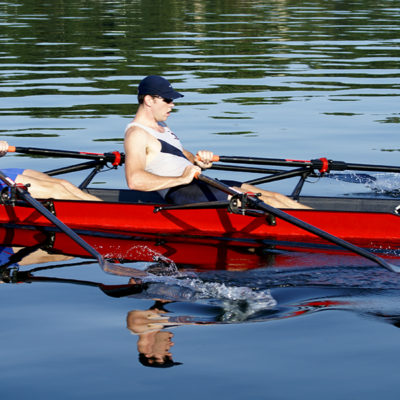 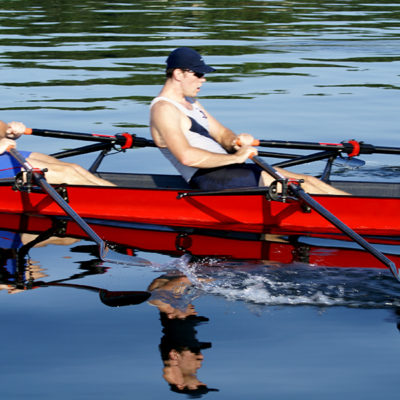 Force Measurement Data As Displayed In The Rowing Tank

When possible, force measurement data can be more easily collected in an indoor rowing tank and then projected instantaneously monitor so that corrections can be made at the exact place in the stroke where an error occurs. Note: It is preferential to use athlete-powered tanks to get a closer simulation as to how the force is applied in a boat and eliminate external power input that would distort the data. We have found that by taking steering, wind, wakes, and the effect of athletes interaction out of play provides less distortion of data and better feedback from each athlete’s “true” force curve.

Also, the data display provide athletes with a better understanding of the physics behind rowing and results in a more repeatable stroke.

By:  Jim Dreher and Coleen Fuerst